First up to bat, Josie Two Shoes.  Her theme for the week is:

Now it is Les' turn and perhaps this is not too much of a sacrifice...

Snog, Marry or Throw Off A Cliff

Apparently the rules of this are... Pick a male/female for each category: 1) Kiss, 2) Marry, and 3) Throw off a cliff.  I am guessing this is Les trying to get me in trouble with my wife...but since it is all pretend.  I will sacrifice for the meme cause.

I have always had a thing for red heads...Christina Hendricks 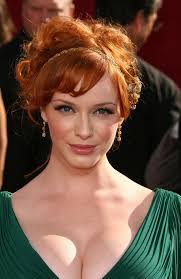 Trust me, if I ever tragically lost Heather, the word marriage would become lost in my vocabulary.  But if I absolutely had to under pain of death.  I would sacrifice for my children and marry...

Throw Off a Cliff?

Not sure I would use that terminology but I am really not a fan of slap stick comedy.  Even though he is Canadian, for foisting dumb and dumber on the world...Jim Carrey