The best part of having a kid is naming them...unfortunately Heather would not let me sell naming rights to any of the kids.  Pepsi Smith would have potentially been a great name!  Set straight by the boss while we were naming Erik - this is a post I wrote about my rules for names...

P.S. Heather wanted me to add that I had to do this one because I am not living in this century as I do not own nor care to own a cell, smart or otherwise communicative device.

10.  I have always loved the name Akbar.  Whether it was getting my geek on from a Star Wars reference or just the thought of naming a child 'great.'  Unfortunately, Heather kibosh-ed me on this one.  She though Akbar Smith just didn't work.  Kill-joy.

9.  Ursula - Heather has called me her bear since we first met.  She thinks I am temperamental like one.   It was also the name of one of Heather's grandmothers'.  It was so in the running.
8.  Sheldon - Sheldon Cooper Smith.  Don't think I would not do it.

7.  I have always like the name Sara(h) but I didn't know how to spell it correctly...
6. Charles - especially since we live in Charleston.  Once again Heather overruled me.  Think of it, when you want to go classy - break out the Charles.  When you want to just be one of the guys, who is a better buddy that Charlie.  It is a great name all around.
5. Rebecca - see explanation above.  Professional time you are Rebecca and fun time you become Becky.  Perfect.  Plus Rebecca Romijn played Mystique.  How can one not look at this picture and not fall in love... 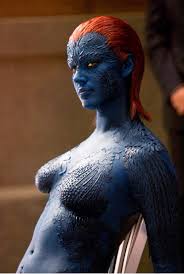 4. Caleb - A name I always liked.  Don't know how I came to know it, don't know where I got it from but it is very cool!

3. Robyn - no, we didn't name her but it is works for her.  A beautiful name for a beautiful young lady!
2. Erik - Named after the great Norse leader, Erik the Red, boy did we get this name right.  Our Erik is indeed a person of free spirit and exploration with a nasty side at times.
1. Liam - We named him before the name got 'hot' - hence once again proving that Heather and I are indeed trend setters.  Actually, we were actually going to name him William but I remember that Will Smith became known for this...
So I wimped out and went for the Will derivative Liam.  I so like the idea of my son being named after a derivative (one again proving my geekiness).