Baltimore is a fascinating city - it has tremendous history, some beautiful architectural features yet for every fabulous marvel; there seems to be a head shaking moment.  Here are three examples: 1. Oriole Park and Camden Yards is absolutely breath taking in its beauty.  It is one of the best examples of revitalization I have ever seen.  The Power Plant on the inner harbor is a nice example of how to ruin what could have been an excellent revitalization...a perfect example where the idea was good but the execution with its crass commercialism was poorly executed (particularly the guitar on the stack). 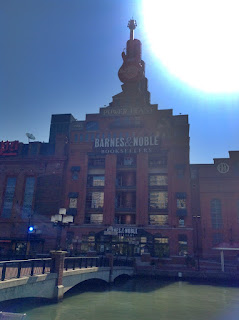 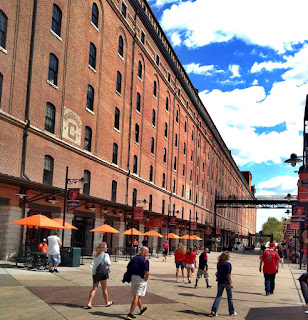 2. The signage and accent pieces around the city were sometimes absolutely stunning and other times not even half a block away - a little cheesy.

3. You can find beautiful history and turn less than 90 degrees and find...Ripley's Believe or Not or turn the other way and find Dragon Paddle Boats you can rent... 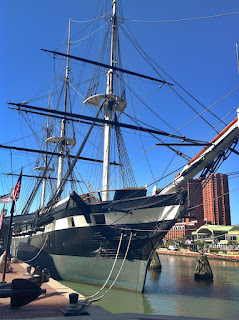 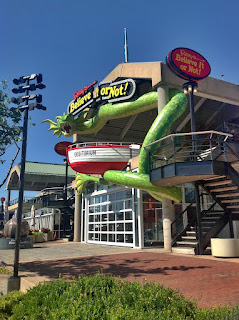 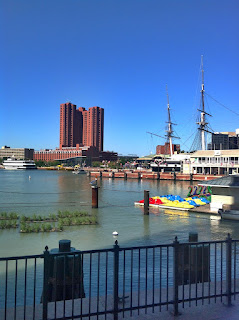 There is nothing wrong with a Ripley's Believe It or Not museum but like most of the city, there seems to be little to no congruence.  It is a constant juxtaposition.  It is almost like a Salvador Dali painting.  For some the  city's quirkiness will become its charm.  People will see beauty in it constant contrast.  Others will be put off by what locals often refer to as 'Baltimore moments.'

A few tips if you are travelling to Baltimore:

1. If you are staying downtown the link between the airport and the downtown area is excellent.  I took a cab downtown when I arrive and the fare was $36.50 ($40 with tip) and the trip on a Sunday afternoon took about 20 minutes.  For a 30 minute trip from downtown on a mid-morning Wednesday on the LRT back to the airport, the cost was $1.60.

2. Oriole Park at Camden Yards is a must see.  It is a beautiful park and has a wonderful atmosphere.

3. Customer service seemed to be always hit or miss.  Sometimes it was wonderful and other times it was nonexistent - especially in the hotels.  You would figure with hotel conference in town - games would have been raised but no.  For example the hotel I stayed in (Days Inn Inner Harbor) had an awesome location and twice I met front desk people that were fabulous.  Two other times, the front desk staff barely acknowledged that there were customers.  Then again, the cabby I had coming in from the airport was the height of professional and two other times I watched cabbies curse each other out in front of the convention center.

4. The inner harbor area has well done attractions but crass commercialism surrounds it.  You can see and learn about America's history while sitting in a Hooters or Cheesecake Factory.

5. There is a lot of poverty visible and many of those asking for alms are quite aggressive.  This could create uncomfortable feelings among many guests of the city.

Overall, I just do not know how I feel about the city.  There are parts that I would love to go back for and others that I would just as well forget.  I can only describe it as a Ying and Yang destination - for everything wonderful there seems to be something off putting.  The city definitely has personality and if you like people who are often described as 'colorful' - you will probably like Baltimore.
Posted by Wayne W Smith at 7:24 AM