How can one being in HTM and not talk about American Airlines filing for bankruptcy protection on Monday? 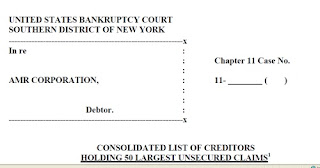 The airline industry in the post 9/11 world in the USA has been absolutely pummeled instance after instance.  According to the Air Transport Association,  From 2000 until 2010 the average cost of fuel per gallon has risen 170%, airport landing fees have risen 70%, and employee related expenses have risen 35%.  In total, the cost of running an airline has increased 110% since 2000.  Further, due to the economic slowdown and rising taxes, the airlines have been unable to compensate for these costs through price increases. As is illustrated in the table below taxes on an average ticket have risen from $38.54 in 2000 to $52.61 in 2010 while the airfare alone has increased $2.07 since 2000. 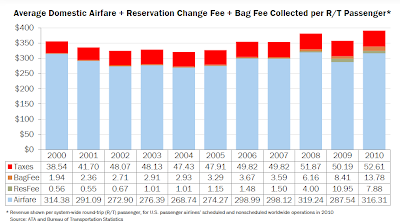 In the ten year span from 2000 to 2010 the average price of a round trip ticket has risen 10% including taxes, fees & fares.  Over the same time costs have increased 110%.  Examining these numbers, it does not take a CFO to figure out that this industry is in serious trouble.   Unfortunately, American Airlines is the first in this wave to file for bankruptcy but given the current status of the industry, it will not be the last.
Posted by Wayne W Smith at 5:13 AM