As reported on the BBC, Lowe's has decided to pull its advertising from a US reality show because a group in Florida argued that the show, "...hides the Islamic agenda's clear and present danger to American liberties and traditional values." 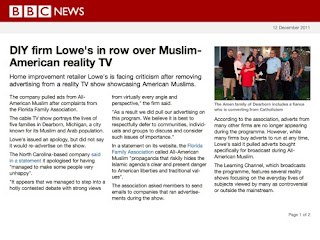 According to the Lowe's spokes people, the company is just trying not to alienating customers.  The problem is that they have been placed into a no-win situation.

The most interesting part of this story is that as the demography of the United States continues to change, this is an issue retailers and other political figures are going to face more often.  According to the US Census Bureau by 2050, more than 50% of the population of the United States will be non-Caucasian.  With this shift in demography, will come a redefining of 'traditional values.'  Perhaps groups in the majority today should consider how they will want to be treated when they become a minority.