On October 25th several British news agencies reported that Ryanair was using duct tape to repair a cabin window. Please see the screen clipping from the Daily Mail below as an example. 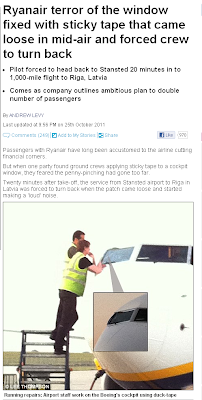 It turns out, that this story was less than accurately reported.  In reality, according to the Economist who actually did some investigative reporting, the maintenance staff was actually using a $700.00 per roll Aluminum bonding tape to ensure that a potentially uncured sealant was kept in place. The tape was approved by the manufacturer, the FAA and the company's engineering department for temporary situations such as the one stated above. 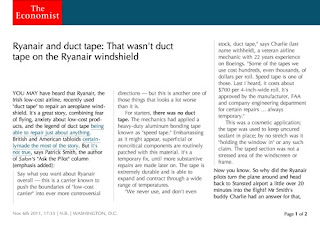 The moral of the story, is that the media has to stop worrying about being the fastest but rather concentrate on the story right.  This story, which is now in folklore, could have potentially derailed a rather successful airline.  In an industry where few airlines are actually making money, Ryanair reported a second quarter pretax profit of 463m Euros.  This type of unsubstantiated reporting however, could have cost the airline several millions in revenue (and potentially hundreds of people their jobs as a result).  Then again, the caption under the picture from the Daily Mail Report did call it Duck Tape - so one should not be impressed by their editorial standards. 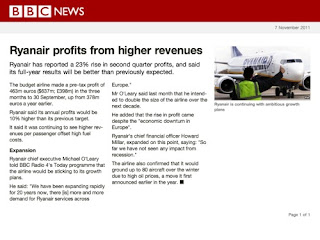